Spiritual:  I'm a few pages behind in my scripture reading, so I'm cutting this short tonight so I can go catch up!

Physical: I was doing FABULOUS until 2 weeks ago when I did something unfortunate to my posterior tibial tendon. I am trying to behave so I can start running again in a few more weeks. It was completely my fault. I did not listen to my body one night and am losing a month of training because of it. grrrrrrr!

Financial: Not so great this month. We had several unexpected things pop up, but also, I just wasn't as diligent about being prepared when I went grocery shopping. I did a lot of "I'll just run out and get..." type trips to the grocery store. It's amazing what a difference that makes!

Organizing: The challenge wasn't very challenging this month, because I was already up to speed in those areas covered. April is a whole different story!

I'm ready for a new month and the chance to start fresh, so to speak!

Books I Read in February: (Slightly higher number thanks to the lack of running.)
Stay
The Perks of Being a Wallflower
The Importance of Being Seven
Mrs. Pollifax Unveiled
Smokin' Seventeen
The Mark of Athena
Sleeping Freshmen Never Lie
Forever
Explosive Eighteen
In the Garden of Beasts
Code 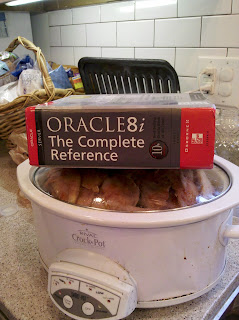 This Oracle book has followed us from place to place through most of our marriage.  It is really heavy. And takes up way too much room on a bookshelf. AND it is useless. Todd used it for a little bit 14 or 15 years ago. For a while back when he was working in NYC I convinced him to store it at the office. When we moved here, he brought it home (the company had sent all the stuff from his office in NYC to his office here in Ohio).  About 5 years ago, the rope on one of our windows broke making it so if we wanted it open, we had to wedge something in it to hold the window open. I grabbed this beauty off the shelf (where is was taking up the space of FIVE books!) and decided I didn't hate it anymore since it was serving a purpose. The oracle book has served in the Holding the Dining Room Window open position for years now. Today I grabbed it and gave it a new job. Today it was The Ham is Just a Little Too Big for the Crock Pot and I Need Something to Weigh it Down.  Oracle came to my rescue! (And the ham was moist and delicious.) I'm becoming more fond of Oracle 8i as the years go on.  It may be obsolete in the computer world, but it's part of our family now.
Posted by Unknown at 6:35 PM 1 comment:

Nathaniel's Been Holding Out on Us!

Nathaniel doesn't love performing. He enjoys everything else about theater, except the actual performing. And yet, this year especially, he keeps throwing himself at it as if he's determined to find the right formula to conquer this fear. When I saw him perform last week in the 5th grade production of Cinderella, I was SO proud of him. He didn't seem nearly as nervous for this production as I've seen him with others in years past.

Also, he SANG! Nathaniel has always had a deep voice, even as a baby. So, while other kids can happily sing along to chirpy "kids' music" that was never easy for him. He often just gives up and sings at sort of a low monotone leading the rest of the family to feel sort of bad for him being the one Smith kid who doesn't really sing.

But, here on video, I have proof that he CAN do it! He can match pitches, AND sing high, AND harmonize! (This was the evening production, and he was a little more nervous for this one, so he was running out of air at the beginning, but that didn't happen in the day time production.)

On top of all this, he's performing in a different production this week. No singing in this play, but he's really looking forward to only worrying about lines for one show now. (He's been working on both shows for the last couple of months.)

Super proud this kid!
Posted by Unknown at 8:17 PM No comments:

We Know How to Party!

Last night we had a lot of 12 and 13 year old boys and girls at our house for a birthday party. I'm honestly not sure how many there were. The numbers ebbed and flowed all night.  And I don't have a single picture of the event because I was running up and down the stairs "to deal with the food" every 15 minutes [which is a total euphemism for "checking in on the kids to make sure everything was okay, no property was damaged, feelings hurt, and nothing inappropriate was going on"].

It was exhausting, but very nice to realize that Benjamin has a pretty decent group of friends.


Todd was watching The Muppets with the other kids and in charge of Lilyanna's bed time. At one point I came back into the living room to ask him something and was surprised when he was gone. I called for him and was confused when heard him answer nearby. And that's when I found him here: 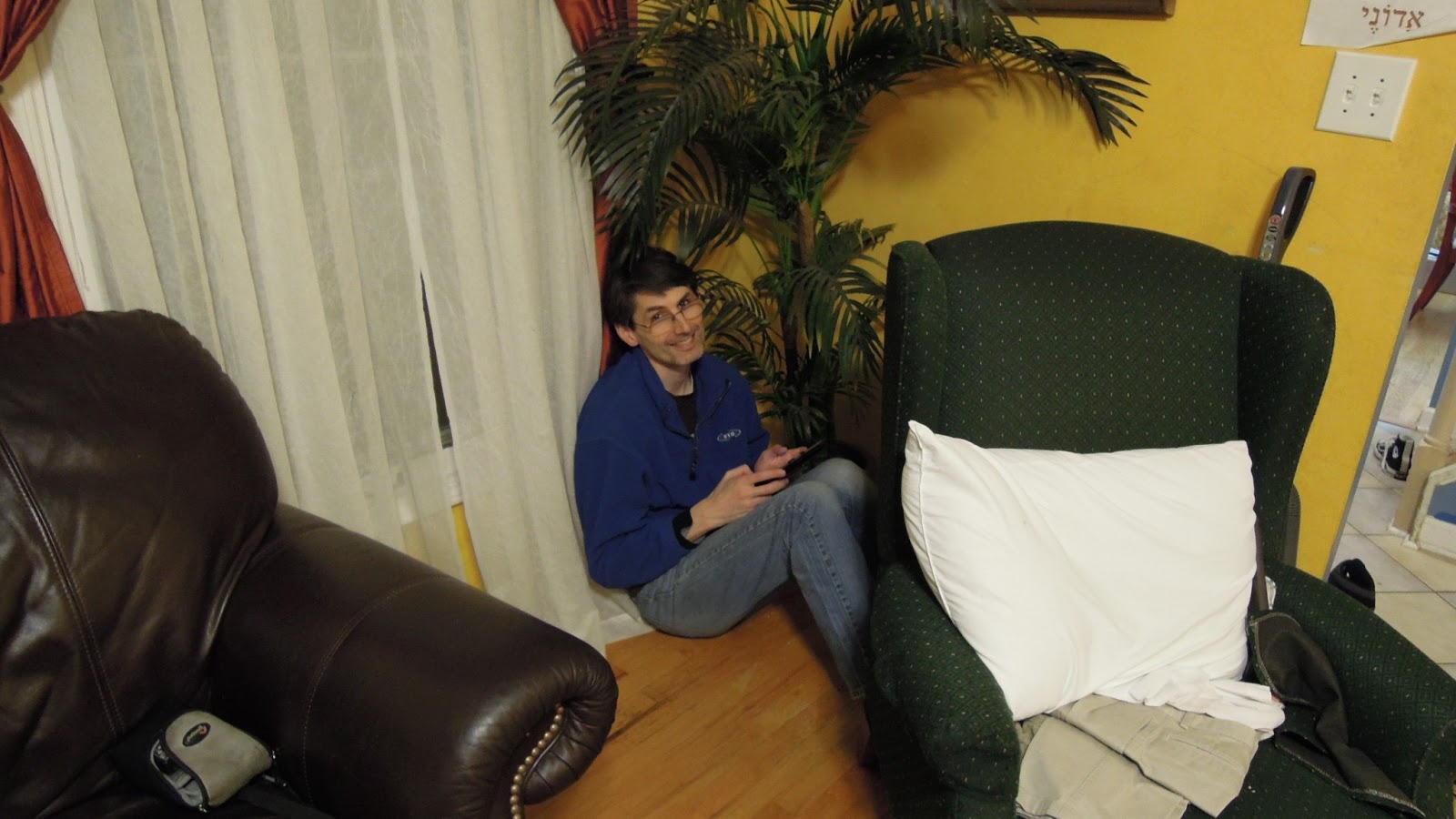 He claims he wasn't hiding. He claims it was just that he needed to plug in the tablet while he was reading.  I'm not so sure...

Spiritual: I am completely up to date on my scripture reading. Mostly because I have started listening to scriptures while I run. Do you know what doesn't help you run faster? Leviticus. Or Numbers. Or Jacob, Chapter 5.  However, I'm not really going for speed. I'm going for not dying before the end of the race, which I think is a worthy goal.

Physical: I ran 34.75 miles this month. It should have been closer to 40, but I started out the month sick and then had a couple of days where I had to short myself a mile because there just wasn't time.  My proudest moment was when I ran 2.5 miles in 28 minutes a few weeks ago. I know that for a real runner, that isn't at all impressive. I also recognize that I have run much faster than that in years past. But for me right now with this body, that was awesome!

Financial:  We've done pretty well! There were some things that we needed to purchase, but we did a much better job of keeping our spending in check.  Next month will be more of a fast because   the last trimester of dance tuition is due. Also, I'm going away for an overnight of alone time on my birthday weekend, and buying a new vacuum. I'm all done with the vacuum that has literally been held together with duct tape for so long. I hate having to re-duct tape the hose each week, too. I found someone in the neighborhood who can use our old vacuum, so as soon as I get my new one, I will pass the old on to her.

Organizing: The challenge is going okay. I went through much of Lilyanna's toys and dolls and dress ups the other day and got all of those organized. And I'm still doing great at winnowing things. I've been donating and selling left and right. It makes me feel lighter.  Stuff really can weigh you down.

Books I Read in February:
Postcards from the Dead
Time after Time
Virals
Seizure
Heaven is Here
True Colours
Drop Dead Healthy
Why Can't I Be You
Posted by Unknown at 10:46 AM No comments: