Caleb had a unit in school where he learned all about many of our national monument.  He got really into it and would come home each night excited to tell us new and interesting facts about whatever they'd discussed that day. 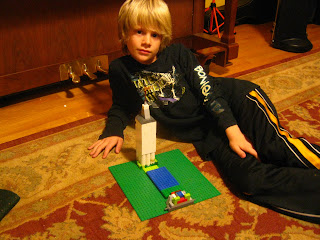 One night while I was making dinner, Caleb came up from the basement to show me this wonderful creation.  From memory, he did the Washington Monument, Lincoln Memorial and the National Mall.

He insisted I take a picture so he could send it in to the Lego magazine.  Each month they highlight kids who create something new and different out of the gazillions of Lego sets they already have.  He's very excited by the very idea of being in correspondence with the good people at Lego. 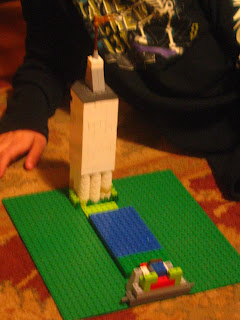 I am very proud of Caleb who is forever embracing all of his creative interests.
Posted by Unknown at 11:30 AM No comments:

If I needed any hint that Lilyanna is very much her own person and not a little copy of me (despite all baby pictures to the contrary), last night was the perfect event to highlight a few of those differences.  Lilyanna cares VERY MUCH about shoes.  This has been the case since she was old enough to wear them.  Now, I understand a love of shoes.  I wear a size 10.5 which is a nearly impossible size to find and thus makes it so I don't have a closet rivaling Imelda Marcos.  Lilyanna may eventually inherit this unfortunate shoe size, but in the meantime, she will happily change shoes 6 times a day according to her mood.  By the time she was 14 months old, Todd was irked that she was taking up more room on the shoe rack than he was.

It was her love for shoes which inspired her costume this year.  That and a sale on sparkly shoes at Target.  $10 sparkly shoes?  Yes, please.

Lilyanna understood how to trick or treat in a way that none of my boys understood this early in their development.  I figured we would go down our street and then come back and join Todd in passing out candy to everyone else.  Not so.  Lilyanna literally pulled me around the block AND insisted on going up every single driveway to EVERY house regardless of whether it was inhabited or not.  We were out almost as long as her brothers.  She also kept her candy basket in her hot little had the whole time.  It probably weighed half as much as she did, but she refused to let go of it, or go home because it was getting too heavy.

It was a little chilly on Halloween and Lilyanna's costume had short sleeves, so I brought her red hoodie along.  We had the following conversation several times:

While she doesn't have words for this yet, she didn't want to ruin the lines of her outfit!!  This is where she and I wildly diverge.  I am happiest in comfy clothes.  I used to look through clothing catalogs and say, "Ooo, doesn't that look comfortable?", to the eye rolling of the gaggle of gay boys.  At one point Mark declared I wasn't allowed to shop by myself anymore because I dressed myself like "a granola crunchy lesbian" (A term endearingly used by the Queen Mother, John, in reference to me) when left to my own devices.

It appears Lilyanna has not inherited THAT propensity of mine.

Anyway.  Here is the cuteness: 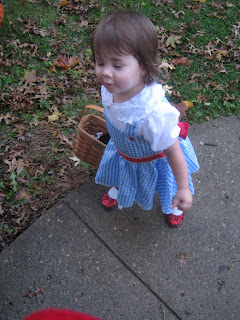 We reached a neighbor's house who had a fire going in the driveway.  She was freezing by then, and pulled up a chair to sit by the fire and warm up before she headed back to our house.  But she still refused her hoodie.  She is cute, but oh, the opinions!
Posted by Unknown at 11:20 AM 1 comment:

Halloween was an interesting experience this year.  It's usually the holiday that I go all out clever for, but this year with all the sickness and surgeries of this month, I couldn't quite muster up the energy for anything extra.  Decorations only happened because the kids finally told me they were going to do it 2 weeks ago.  I did manage a fun Halloween dinner including mashed potato ghosts with caper eyes, and this was the after school snack which was a HUGE hit and was devoured within minutes of the boys walking in the door.  Frankly, it was a wonder even this happened.  Lilyanna decided over the weekend that she didn't need to sleep anymore in the middle of the night, so I was a bit of a walking zombie on Halloween day.  (That way I didn't need to even don a costume...so, it was mildly convenient...) 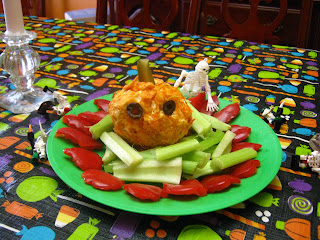 Warren stopped by right before Lilyanna and I were about to nap during the day and thoughtfully offered to come over that evening  to take the boys trick or treating.  Here is the lot of them before they went that evening.  His dedication to the task lasted only until a female friend of his came along and he went off with the girl. 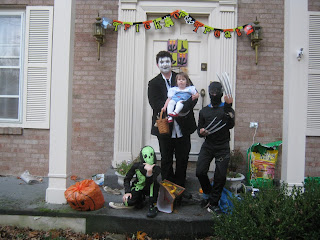 Notably absent from the picture is Benjamin.  Benjamin learned a hard lesson this Halloween.  As a member of his studio's tap and hip hop dance companies, he agrees to a higher set of rules than everyone taking recreational classes.  One of those rules is that he is only permitted 2 absences per quarter.  He is going to miss one week before Thanksgiving because we'll be out of town, but he squandered one of his other absences in September when he just didn't feel like going.  He didn't feel great, but wasn't sick, but decided to stay home and play that day.  So, no trick-or-treating for him this year.  He was alone in most of his classes on Monday, but he not only recognized the lesson, but also got some really good one on one time with his dance teachers. 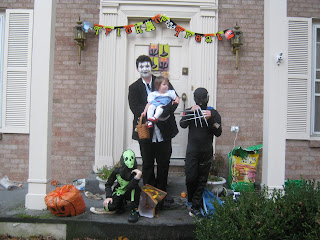 Caleb was VERY proud of his glow in the dark skeleton costume and loved running up to his dark bedroom to test it out all afternoon before they went out trick or treating.  Nathaniel was a Ninja with spikes...he had a better name for it, but I don't remember now what it was.  Lilyanna was Dorothy from the Wizard of Oz.  But she gets her own separate post.

Despite all of my hoopla this year, the kids had a great time.  This makes me think that maybe in future years, I can not drive myself so crazy with plans and preparations, and we can still all have an enjoyable holiday.  We'll see if I actually remember this lesson next year.  ;)
Posted by Unknown at 10:29 AM No comments: