Benjamin has been doing ballet for 5 or 6 years now, but other forms of dance for far longer. His ballet teachers have been trying to convince him of "proper ballet attire" for nearly as long. Since all the other dance forms he does are far more casual, he resists. Oh, he'll don a white t-shirt, and maybe some black athletic pants if black ones happen to be clean, but black ballet tights and a dance belt? No.

[A dance belt, btw, is a balladore's version of a jock strap. Imagine, however, that a jock strap and a thong got together and hybridized. Visual confirmation NSFW.]

I am sure I'm biased, but Benjamin is a beautiful ballet dancer. (So is Caleb, but Caleb totally doesn't care about ballet other than to torture his poor teacher.) I can't be totally biased, though, because one of Benjamin's current ballet instructors wants him to audition for a summer ballet intensive that he seems to think Benjamin will have no trouble both being accepted in to and given a big scholarship to attend.

My son is feeling very flattered at the idea of such a thing and is planning on auditioning at one of the regional auditions in a couple of months. His teacher pulled him aside last week and said, "So, you know you're going to have to wear ballet tights and a dance belt to audition, right?" While I wasn't there for this conversation, I have this teacher for a dance class also, and I can imagine the gleam in his eye as he said it. There was probably internal clapping going on, too, as he thought, "Aha! I got him! He'll HAVE to come to class properly dressed NOW!"

This was the conversation Benjamin and I had following:

B: Mr. Adam says I need dance tights and a belt for the audition.

Me: Did he cackle maniacally as he told you? Or say, "Neener neener neener?"

Me: You know he was doing it on the inside.

Me: The time has come, my son.

B: It is the coming of the great and dreadful day of the dance belt!

Me: You poor thing.

B: There shall rain down hellfire and brimstone and dancebelts!

B: I don't even know if everything will stay in place given my lack of bottom.

Me: Maybe it will help your bottom look better.

B: I'll be in tights

Me: Yes. Well, we'll have to make time to go shopping for dance belts and tights one of these days.

B: Hellfire and brimstone and dancebelts. [heavy sigh] 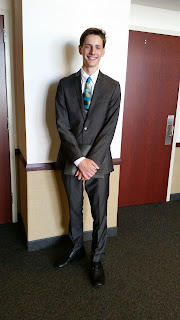